Be a Guaranteed Buyer 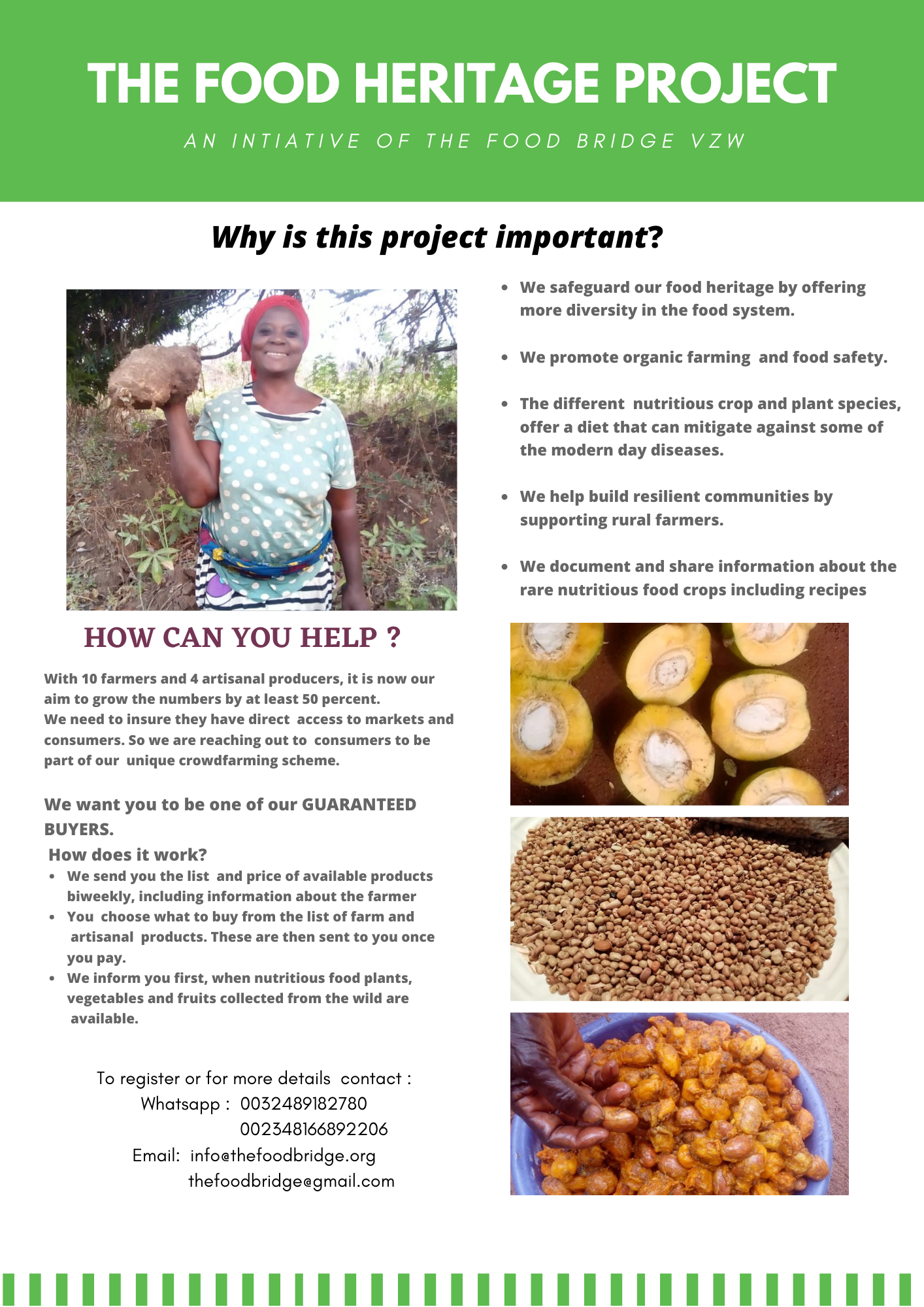 The new planting season just started for our Food Heritage Project's farmers and one important aspect of this project is to provide access to markets on one hand, and on the other hand, provide consumers access to nutritious and safe indigenous food crops and plants.

We want you to be one of our GUARANTEED BUYERS.

How does it work?

Email: This email address is being protected from spambots. You need JavaScript enabled to view it.

The first  process was to select the locations for the pilot project. We had to take into consideration availability of land, traditional farming expertise available in the area, support of the traditional authorities  and the willingness of the farmers to participate in this project. Thus 2 locations were chosen

We met first with traditional and religious leaders in Ogbaku and the traditional ruler of Akili Ogbaru, to introduce the project and the aims of the project. All the people we met with, acknowledged the need to promote nutritious indigenous crops and conserve rare and threatened species, which was encouraging.

The next step was to meet with the farmers. Although they were interested in the project, some were worried about the economic benefits. Thus we informed them that we will market the produced crops through our network.

To  further motivate them and allay their worries,  we promised to support them to grow selected organic crops which are now part of the food system such as onions, tomatoes and paprika. Thus they are assured of having some extra income. The distribution of these organic seeds was done in December 2018. We also informed them that 50 percent of what they produce will be for their consumption. We intend to liaise with local schools to serve lunch  made from these indigenous crops to the children.

To start off, we  asked the farmers to give the  names of crops or species that they knew to be nutritious but were no longer widely grown. We also collected more names of plants from university researchers especially those that are rich in protein.

The next step is to do an online drive for crops and seeds to add to our database. This will be done through social media platforms of cultural groups, associations and community networks. To insure it succeeds, we will give each person that sends us a picture of a crop or plant that is rare or endangered, the location of the crop/plant, the local use or recipe, a free telephone recharge card. In the appendix is a list of the crops and plants we have for this planting season.

Although the farmers in the project have agreed to dedicate sections of their farms for  growing  indigenous plants and crops, we also realized that we need to have land where collected crops can be planted and conserved prior to their distribution to interested  farmers or individuals . For this we need land that is not just fertile but is located near a sustainable source of water. We got  land in Agwu and Aninri in Enugu state. The first piece of land  which is located near a stream is 2 hectares. we have been offered the option of buying more than  20 hectares of fertile land close to  a river. However, at a cost of 4 million naira which at current exchange rates is 9895.044 euros, we need support to be able to afford the land.

The second phase of the Food Heritage Project in north central Nigeria has been completed. Not only do we have farmers growing more indigenous crops, we have helped them realize that crops can be grown without chemicals. However, using manual labour for weeding instead of using a bottle of chemical herbicides costing a fraction of what labourers are paid, seem incomprehensible to some of the farmers. They had to learn that with many consumers demanding for organic food crops, there is a growing market for their products.

Although harvesting of most crops will commence end of December 2020, we already have buyers waiting for the products. In 2021 we plan to expand the network of farmers involved in this project. There are farmers now that will plant different types  of beans, cocoyam, millet and fonio. By February 2021 we will have a full list of farmers and their products.

The rural farmers in the Food Heritage Project’s network, do not have access to funds from government agencies, banks or development agencies. Thus to continue supporting these farmers, while we also train them to be good and successful agrofood entrepreneurs, we are launching an appeal for sponsors for the farmers.

Working with the current plan for each farming season, a farmer will need a sponsorship of 200 euros(or 95 thousand Naira) for an acre with 3 at least different crops (or varieties), seedlings, labour and logistics. Sponsors can choose the farmer they want to support or the crops. Sponsors get 30 percent of the harvest, which they can use or donate to a good cause.

The Food Heritage Project focuses on  the importance of preserving and harnessing the  nutritional, medicinal and  economic potentials  of  the native African crops and plants, for the benefit of African communities and humanity.

We started a pilot of this project in southern Nigeria- Enugu, Anambra and Imo  and north central in 2018. Other African countries will follow later.

Our aim  is to collect, plant  and re distribute nutritional rare or endangered native crops and  plants. We are working towards  reintroducing these nutritious crops and  plants into the diet of the people and also introducing them to people across the world. The Food Heritage project  offers an alternative model  for  the  modern Nigerian food system,  by working with communities for the collection of the seeds and plants, then  local farmers for the planting and dissemination of agricultural practices that focuses on agro ecology and biodiversity.

Through our work we are increasing the  pool of nutritious  indigenous food  available in the market. We will create a direct link between the farmers and consumers, using modern technology to market the produce, share information and  recipes too.

For the aims of this project to be achieved with measurable results, we need the support and partnership of interested individuals, companies, organizations and communities. For further details please contact